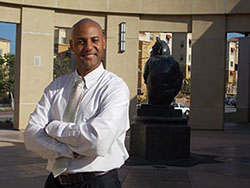 Ajani Brown is a double alumni of San Diego State University where he earned his MFA in Creative Writing and BA in English.  Brown joined the department in 2013 and has been an innovative force ever since.  He proposed and developed the cutting edge course, AfroFuturism, which is the interdisciplinary study of African and African American contributions to science fiction, comic book art, pop culture, and its origins and influences.  In addition to his teaching duties he has been on a nationwide lecture tour since 2014, presenting at such conferences as The World Science Fiction Convention and Comic Con International.  Brown's research focus includes literacy through sequential art, EthnoGothic Horror in comics and graphic novels, the depiction of Black characters in comics as it applies to visual rhetoric, AfroFuturism and Social Justice/Political themes in fiction, comics & graphic expressions, in addition to cultural studies of the African diaspora.  Brown is currently editing the department's first annual anthology titled, The 21st Century Black Woman: Redefining Leadership and Changing Perceptions of Identity.